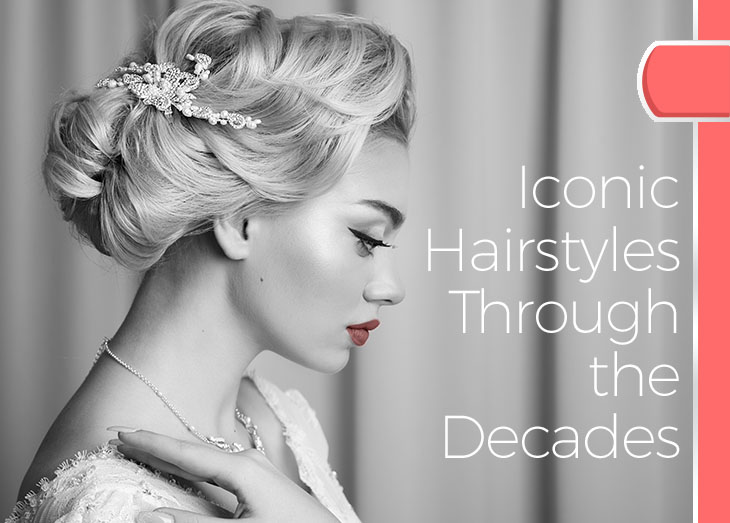 We’ve always been infatuated with hairstyles. Through the decades, stylists have continuously pushed the boundaries of what it means to have chic hair, and we’ve graciously followed their lead. Even the most outrageous of hairstyles have become popular because they make a statement or send a message about who we are as individuals. 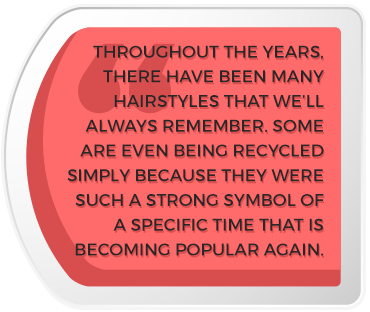 Over the decades, hairstyles have been through a myriad of updates, as people continue to try to stay in style with the current trends. In fact, many hairstyles have been associated with status, so it’s no surprise that we are always on the lookout for possible new trends.

Throughout the years, there have been many hairstyles that we’ll always remember. Some are even being recycled into the current trends, simply because they were such a strong symbol of a specific time that is becoming popular again.

The following are 9 iconic hair styles through the decades, which you may recognize from old photos or celebrities who made them famous. 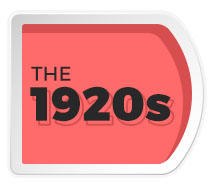 The “bob” was one of the most popular styles, sitting above the shoulders and often being accompanied by long or straight-across bangs. The style was made popular by lots of famous celebrities, including Louise Brooks, who was a silent film star. This hairstyle also had some edge added to it, with some females having the style tapered along the back for added layers.

Another one of the popular hairstyles of this decade was known as the “finger or Marcel waves,” which were mostly worn by women with a flapper style. Even now, you’ll notice that celebrities embrace this hairstyle, as it creates a persona of strength and class that many women were promoting in the 20s. The look has been updated, in recent years, to have more of a softer flow, while still mirroring the classic, romantic look. 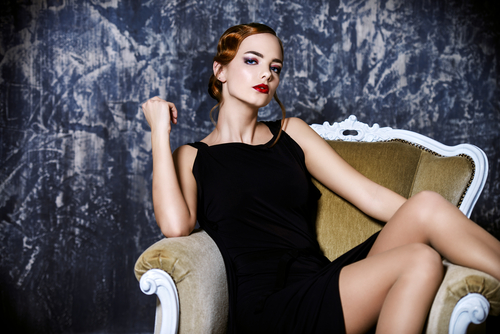 For men, the 20s were all about embracing quality hair products and creating a long, slicked-back look. Men had to grow out their hair considerably to create the look and would either push the hair back from a center part or comb everything from the front straight to the back. This was certainly a time when men were much more attentive to their hairstyles, as this style required more care. 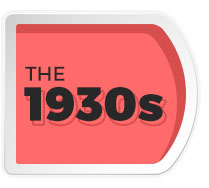 With the success of the flapper hairstyle in the 20s, women continued to work with the wavy hairstyle idea well into the 1930s. The newer version was slightly softer than the previous one, with women growing their hair out longer and using less product, for a more natural look.

The hair was usually shoulder-length and was made famous by many female stars including Norma Shearer, Vivien Leigh, and Bette Davis. The style was also a little bit larger than the previous design, proving that we always end up going back to the idea that “bigger is better.”

Nowadays, this style is still embraced by female stars; however, they’re more commonly seen on red carpets and at fancy events than in everyday life.

For men, the 1930s were still very much a time for clean-cut, slicked-back hair. However, many were keen to let some waves come through for more of a softer, romantic look. This could be a reflection of the changing times. 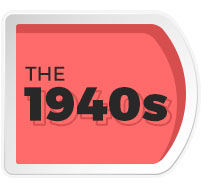 With the breakout of World War II in 1939, things changed drastically for many women. Almost 90% of single women and 80% of married women were employed to work in the war effort, and this meant less focus on material things and more focus on labor. For a time, this meant that women’s hairstyles were covered by hats, uniforms, and scarves, so that they could perform their daily duties, and almost all were encouraged to cut their hair to avoid work hazards. 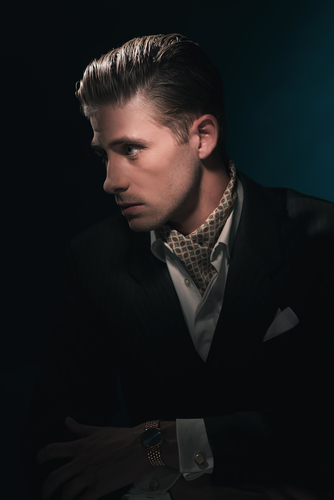 To counteract the dreariness of the war, many actresses of the time embraced extremely glamorous fashion and hairstyles for the viewers’ enjoyment; however, many had the request to cut their hair so as not to tempt women to grow theirs out.

The general style was a side part, soft curls and hair pulled away from the face. The idea in the 40s for women’s hairstyle was all about convenience—something that was easy to pin up at work, and simple to let down for a night on the town.

For men, a conservative and professional look was the key style of the decade. Slicked-back hair still seemed to be the choice for men, but more and more were adding some volume with their natural waves at the back. Today, slicked-back hairstyles for men are a prominent style when it comes to looking professional, stylish, and hygienic. The 40s were a true definition of being “clean-cut.” 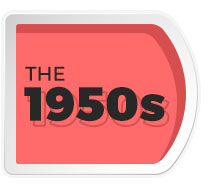 Post World War II, there was an air of prosperity for both men and women, and a disposable income meant that people could spend a little extra on their own hygiene and style. Better hair products, makeup, and body products were now becoming more readily available, and women embraced these items. The 1950s were a key time for new hairstyles that we continue to embrace today.

Popular hairstyles for women in this century were influenced by the likes of Audrey Hepburn, Elizabeth Taylor, and Grace Kelly. In this decade, one of the most popular hairstyles was that of the “Italian Cut,” which was made prominent from Italian movies when television shows and movies became more accessible.

The Italian Cut was recognized by all-over hair curls and a short and shaggy demeanor that was still somewhat organized. Other hairstyles seemed to stem from this popular hairstyle, with women of all ages embracing shorter hairstyles with large waves and curls.

For many women, these hairstyles that were referred to as the “Poodle Cut” or the “Bubble Cut” were straighter at the roots and gradually became curlier toward the ends of the hair. The hair was compact but, slowly, began to embrace more volume closer to the end of the decade.

Other notable hairstyles for women of the 50s included the bouffant, popularly worn by Audrey Hepburn. Toward the end of the 50s, the bouffant was getting well-garnered attention, slowly becoming higher and more voluminous. This was a segue into hairstyles like the beehive of the 60s.

For teenagers, Audrey Hepburn was also a key inspiration for hair when she sported the ponytail and short fringe bangs. Girls would wear their hair at mid-height and often use accessories like scarves to dress it up. Many will recognize this ponytail as one of the first hairstyles that Barbie modeled.

With the emergence of rock and roll and the greasers subculture, men had a lot of inspiration to work with in the 1950s. Male celebrities had a lot of influence when it came to hair, including James Dean, Elvis Presley, and Marlon Brandon.

While slicked back, clean cuts were still in strong favor with some men, others turned to more rebellious hairstyles that required more product and shaping. One of the most popular hairstyles for men of the 50s was known at the pompadour, which was slicked back at the sides with volume on the top. The look paired well with leather jackets and rolled-up jeans, and men were much more dedicated to their looks and demeanor.

Nowadays, these hairstyles are still very much alive. The slicked look is still a favorite, and the pompadour style is still around, though the contemporary version is smaller and less voluminous. 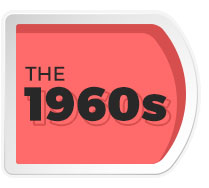 The 60s were a decade of change; hairstyles ranged from the conservative look of Jackie Kennedy to the free-flowing wanderers at Woodstock. If there was a decade for individuality, this was certainly it.

The beehive was a prominent style in the 60s, with celebrities like Aretha Franklin rocking it on stage. The bigger, the better was the motto for this style, and women who wore this style were often referred to as being well-off and very fashionable.

The classic bob came back to life in the 60s when the whole world watched Jackie Kennedy walk into the Whitehouse. She was often seen with smooth, curled under locks and a fashionable pillbox hat to keep it neat and tidy.

Long, hippie hair wasn’t extremely popular until the 70s, but many women started to grow it out in the late 60s. This was a huge change from the uniform, intentional styles previously worn, but it would soon be embraced by women all over the world up to the present. 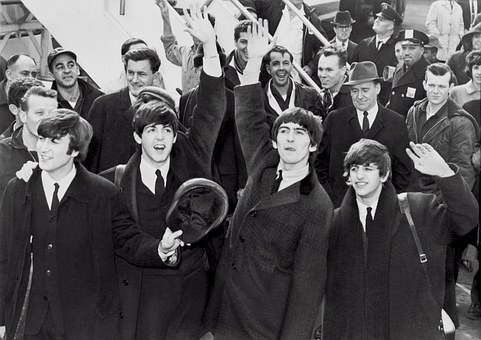 For men, there was one group who made hair look wild and fun: The Beatles. Sporting shaggy mops that drove the girls crazy, this band made the wild, rebellious hairstyle into an iconic look that was embraced all over the world. It was quite a change from the slick, clean look decades earlier, but it is still a well-loved style by men who prefer a less high-maintenance look. 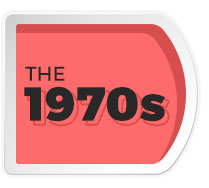 Television and movies were becoming much more accessible in the 1970s, which meant that more and more people were being influenced by the big stars of the decade when it came to their style. In the 70s, one of the most prominent influencers for women was Farrah Fawcett, whose long, blonde waves made her an immediate hairstyle icon. 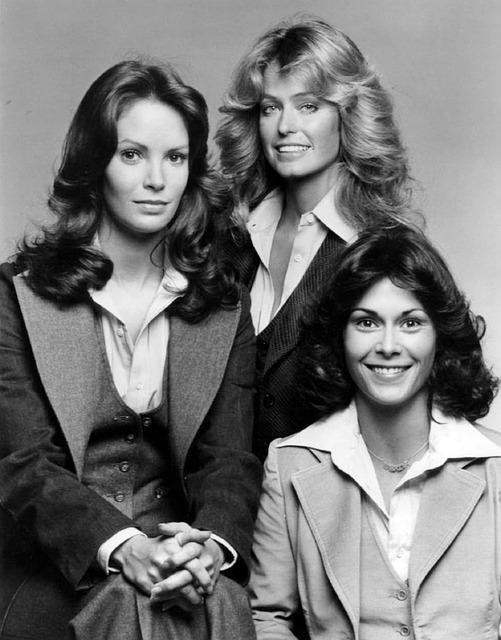 The flicked back hair and soft waves looked natural and soft, and they were easily attainable for many women. Popular bands such as The Runaways embraced straight hair and center parts, which were also easy to achieve and a symbol of a rebellious style.

Another iconic hairstyle of the time was the “Wedge,” which was worn by women of all walks of life, from musicians to teenagers and athletes. The style required a short haircut with angled layers cut all around the sides and back. The style made a triangular shape that was shorter along the front and longer at the back.

For women who preferred to go big with their hair, the afro and perms were both very popular. However, they did require significant work and maintenance. The iconic afro hairstyle encouraged African American women to embrace their natural locks, and this became a huge part of the black pride movement of the decade.

For those individuals who had straight hair, perms became very popular, allowing hair to be shaped into tight curls while still having lots of volume. Barbara Streisand was one woman who embraced the look and made it very popular in this decade. 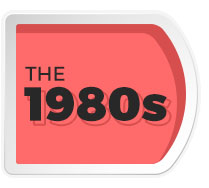 If the 80s hairstyles were known for anything, it was that they were big. In this decade, women started to embrace long, teased hairstyles that needed lots of hairspray and even more for the bangs.

Another popular hairstyle of the decade was the side ponytail, which was very popular for young teens and which continues to be a popular style today. An added bonus was included if you could also score a crimper and large scrunchies, which were also popular accessories of this time. 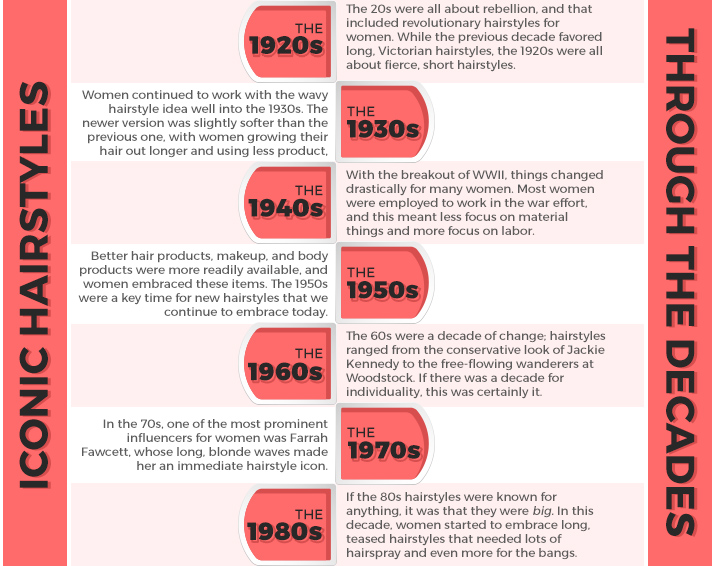 Many of today’s hairstyles are recycled versions of all of iconic styles from the past. From bobs and perms to fringed bangs and shaggy mops, many of the styles we know and love from the past will enjoy a resurgence in time.

For both men and women, not one hairstyle is prominent anymore, as individuality and a sense of personal choice allow us to change our look from one day to the next. Long, short, straight, or curled, today’s hairstyles may reference the past, but we aren’t confined to them. Iconic hairstyles certainly contribute to popular styles, but now everyone has the freedom to explore the hair styles that best express their unique beauty.