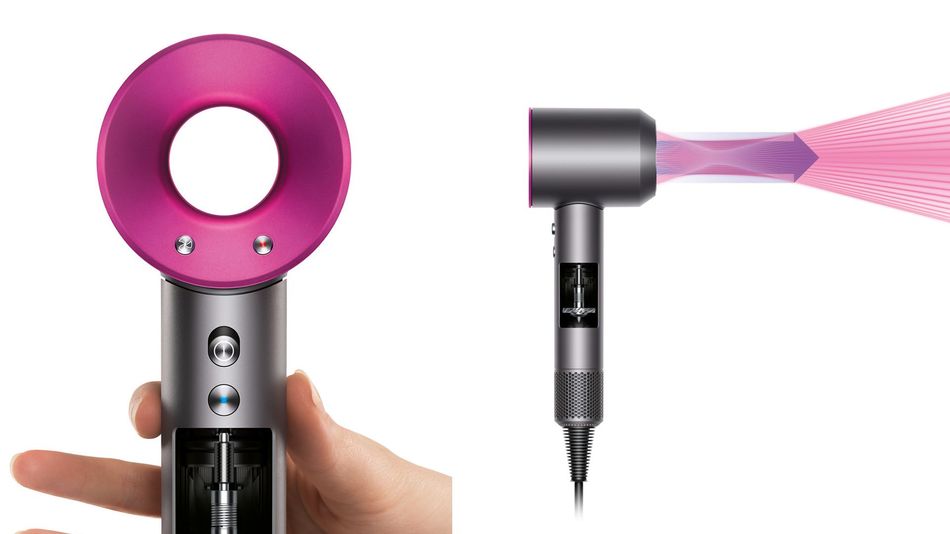 The hairdryer game hasn’t changed much in decades. That is, until this September, when Dyson’s new Supersonic hairdryer will be released stateside in Sephora stores. British engineer and designer, Sir James Dyson, who is known for bringing the world highly engineered luxury through unglamorous household appliances, has just announced the release of the Supersonic, marking Dyson’s first foray into the beauty industry.

After four years, 103 engineers with $71 million of research and development have ushered in the first overhaul of hairdryers since the mid-twentieth century. No longer do you have to worry about scorched scalps and fried hair. Dyson announced in a press release that the elimination of these common problems was the goal of this project.

James Dyson explained, “Hairdryers can be heavy, inefficient, and make a racket. By looking at them further, we realized that they can also cause extreme heat damage to hair. I challenged Dyson engineers to really understand the science of hair and develop our version of a hairdryer, which we think solves these problems.”

Jen Atkin, the product’s brand ambassador, thinks so, too. Atkin’s Rolodex includes high-profile clients like Kim Kardashian, Katy Perry, and Jessica Alba, so you know that whatever she has to say about Dyson’s newest product comes backed with a wealth of experience and influence. When Ms. Atkin commented that the Supersonic, “is the break the Internet dryer,” you may want to listen and see what is so fabulous about this product.

With the Supersonic, the Dyson Company has attempted to solve the age-old problems of hairdryer inefficiency by upgrading its classic motor to improve the three main components of the hair drying experience.

The key to the Supersonic is its high-speed 13-blade motor. No larger than the size of a quarter, this high-tech motor is placed inside the blowdryer’s handle rather than in the head of the device allowing for a new, streamlined aesthetic.

In addition to an appearance change, this new motor creates a high velocity of airflow without the accompanying pressure, which, says the company, is how traditional hairdryers burn hair when they travel too close to the user’s scalp.

This newly designed motor goes further to improve the maneuverability and weight of classic models. Weighing in at just 370 grams, the Supersonic eliminates the so-called dumbbell effect of hairdryers that exhausts your arm and makes styling your hair a workout.

Even Jen Atkin agrees with Dyson’s claims about improvements in weight reduction, saying, “That bck-heavy feeling that usually makes your arms ache completely disappears with this, whether working on your own hair or blowdrying someone else’s hair.”

If Dyson has their way, your next trip to the beauty salon may become a lot quieter. In addition to their motor designed with weight in mind, Dyson’s hairdryer technology emits sound waves at an ultrasonic level. In other words, the sounds are higher than the frequencies that a human ear is able to hear. Further decoded, this means that the noise a typical hairdryer makes is a thing of the past. What does that mean for you? Well, maybe now you can have a conversation with someone else while you blow-dry your hair. Or maybe you can simply hear yourself think.

By introducing this advancement in hair care, Dyson is looking to improve your daily bathroom routine in ways that you didn’t even know needed improvement. “For decades, people have just accepted a subpar experience because no one was offering them anything else,” said Stephen Courtney, concepts director at Dyson and a leader on the hair project.

Be aware, though: All of these wonderful improvements come with a price tag. As with any product revolution, the research and development didn’t come cheap. To be specific, this state-of-the-art hair care was developed using about $71 million. As a result, the Supersonic will retail at $399 when it becomes available in the United States in September.

So does this blowdryer work? Well, after $71 million and four years of testing on 1,000 miles of hair, yes, it does. Plus, Dyson has a track record of successfully persuading their consumers to spend top dollar on domestic status symbols; symbols that almost always fulfill their promises and evolve to be the preferred top-of-the-line technology. So, with its powerful and quiet design, this company is looking to change your hair care experience, one bathroom, locker room, spa, and beauty salon at a time.