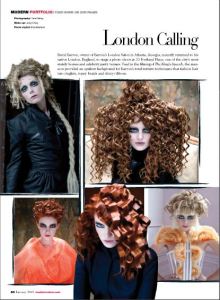 In the summer of 2011, David Barron went to his native London, England where he did a photo shoot at 33 Portland Place.  33 Portland Place is one of the largest and most remarkable houses in London: a rare and exquisite example of a magnificent eighteenth century residence. It is where Edward Davenport and his celebrity friends host the most glamorous and exclusive parties in London. Built in 1775 by Robert Adam, the greatest architect of the era, 33 Portland Place still holds its original character, and boasts more original features than any other London townhouse.   This house is where the movie “The King’s Speech” was filmed.  33 Portland place proved a true inspiration for the intricate designs and artistry behind David Barron’s collection “London Calling” which was featured on page 60 of Modern Salon magazine’s January 2012 edition.  Modern Salon is one of the leading magazine’s in the salon industry, featuring the work of newcomers and hair masters alike.